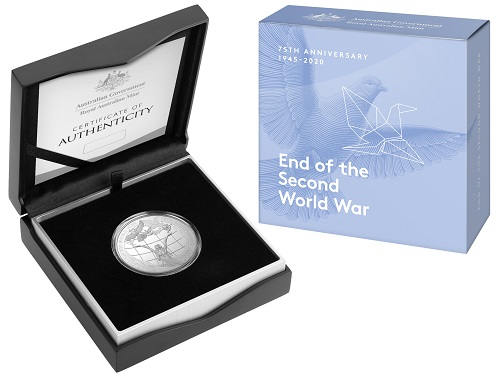 This year marks the 75th anniversary of the end of the Second World War. To commemorate this important milestone, as well as Anzac Day 2020, the Royal Australian Mint has released two limited-edition collectible coins, as well as a new circulating $2 coin.

“These new coins pay tribute to all Australians whose lives were touched by the war,” said Ross MacDiarmid, Royal Australian Mint CEO. “This year, Australians will observe Anzac Day without many of its traditional ceremonies. While we deal with the challenges of COVID-19, we should reflect on the sacrifices made by generations before us.”

On 2 September 1945, Japan surrendered to the Allies, ending the deadliest conflict in human history. Of the nearly one million Australians who served in the war, 40,000 lost their lives. 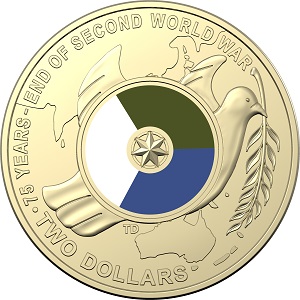 The new limited-edition coins are a $5 1oz silver proof coin and a $2 coloured uncirculated coin, both designed by Australian artist Tony Dean.

The silver proof coin depicts a young woman raising her arms, releasing doves and origami cranes into the sky. The dove is an international symbol of peace, while origami cranes are synonymous with the Children’s Peace Monument in Hiroshima.

The $2 coloured uncirculated coin depicts a dove carrying an olive branch. The background features a map of the Asia Pacific region, where many Australians served during the war. At the centre of the coin is a tri-colour disc representing the three branches of the armed forces and a 7-pointed star representing the Commonwealth of Australia. The same design appears on the $2 circulating coin.

The coins are Australian legal tender and can be purchased from the Mint’s website or contact centre (1300 652 020).