The Australian Defence Force (ADF) will establish Operation NSW FLOOD ASSIST 21-1 as part of the Federal Government’s response to the NSW flood emergency.

The ADF is supporting the NSW Government-led efforts with aerial search and rescue support, civilian evacuation operations, and preparing forces to assist in recovery operations.

The ADF is initially deploying almost 300 ADF personnel to support this operation, expanding to around 700 personnel in the coming days. This will include around 400 from Queensland.

The Minister for Agriculture, Drought and Emergency Management, David Littleproud said defence assistance would be crucial in complementing the great work of NSW’s first responders and aiding in recovery efforts on the ground.

“Our men and women of the ADF have expertise and assets which will aid NSW in search and rescue efforts.

“When the immediate crisis has subsided, ADF capabilities and muscle will be key in helping communities recover.

“We are proud to be able to support NSW in this way.”

The Acting Minister for Defence, Senator the Hon Marise Payne said the Government stands with New South Wales during these challenging times.

“Our thoughts are with those who have been impacted by these devastating floods in New South Wales,” Minister Payne said.

“Substantial ADF capabilities are now preparing to join this operation over the coming days, expanding on the support that commenced on Tuesday.

“When the flood waters subside, the Army Emergency Support Force will be able to assist with tasks such as clearing debris, sandbagging, clean-up duties and helping restore essential services such as electricity and water.

“Once again our ADF personnel have stepped-up in Australia’s time of need, just like they did during the Black Summer bushfires and throughout the COVID-19 pandemic.” 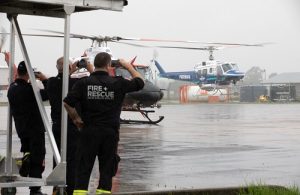 “A rescue helicopter returns to RAAF Base Richmond after conducting a crew swap for New South Wales Fire and Rescue personnel during Defence support to the New South Wales floods.”

This support of RAAF Richmond personnel enabled the safe evacuation of anyone requiring immediate medical treatment, such as dialysis, over four separate flights.