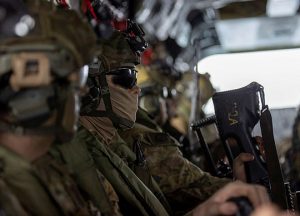 A soldier from 3rd Battalion, the Royal Australian Regiment, in an Australian Army CH-47 Chinook helicopter during an air mobile insertion, as part of Exercise Sea Explorer, Cowley Beach, Queensland.

For the first time the tactical deployment of M1A1 Abrams tanks was exercised in amphibious operations.

The Australian Amphibious Force achieved the milestone at Cowley Beach in North Queensland during Exercise Sea Explorer, the second major activity of the Sea Series suite of exercises.

“During Exercise Sea Explorer we were able to demonstrate our capacity to project a mechanised combat team onto land from the sea,” Major General Ellwood said.

“Troops rehearsed beach landings with a range of military vehicles, including the M1A1 Tank, using a variety of landing craft and with Australian Army ARH-Tiger and CH-47 Chinook helicopters in support.”

Troops trained day and night to familiarise forces with the conduct of amphibious operations.

“The Australian Amphibious Force is a scalable, joint force enhancing the ADF’s ability to achieve the nation’s Defence and maritime strategic objectives and interests throughout the region,” Captain Maxfield said.

“Exercise Sea Explorer enables our soldiers, sailors and aviators to practice a range of procedures and capabilities in complex and challenging scenarios.”

The training will intensify next month on Exercise Sea Raider when the Australian Amphibious Force take the lessons learnt on this exercise, and put them in to practice during a range of realistic amphibious assault and raid rehearsals as part Exercise Talisman Sabre.