CSIRO, Australia’s national science agency, has revealed that the predominant associated crimes with illegal fishing in the Asia-Pacific region are violations of worker’s rights, forced labour or modern slavery.

This contradicts the emerging narrative connecting illegal fishing to organised crimes such as drug, human or arms trafficking.

The research published today found that 75 per cent of relevant scientific literature and more than half of media reports on illegal fishing connects it to labour abuses.

Only 2 per cent of media reports on illegal fishing over five years included other associated crimes.

Dr Mary Mackay from CSIRO’s Oceans and Atmosphere who led the study said the research findings supported efforts to protect those vulnerable to fisheries exploitation which will enhance livelihoods, social well-being and the sustainability of global fisheries.

“More than 30 per cent of global fisheries are overexploited and it’s estimated that 26 million tonnes of fish are caught illegally each year.

“By disentangling illegal fishing from other crimes, we can better focus on solutions to tackle it.

“This will help to ensure sustainable fisheries management and global access to seafood to meet growing protein demand.”

Fisheries are one of the largest and oldest primary industries in the world, providing an estimated 59.6 million people with jobs globally. 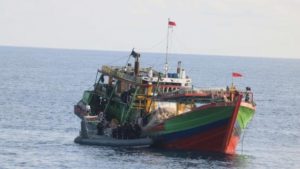 “Data suggests that illegal fishing is predominately connected with crimes such as labour abuses, rather than other crimes such as drug and human smuggling.
Image: Australian Border Force.”

Illegal fishing can occur at all scales, from small to large operations, with catastrophic effects on the marine environment and economies.

“It can be time consuming and costly, particularly for developing countries.

“Our research is filling a significant knowledge gap to process data quickly and efficiently and identify where more resources can be allocated to improve fisheries operations globally.”

Recognising the consequences and prevalence of illegal fishing had led to an increased focus on operations to ensure sustainable fisheries management.

“Illegal behavior in fisheries is often driven by a need to reduce costs and increase revenues.

“Our research shows that fishers don’t smuggle on a major scale. Instead, violations relate to the underpay of workers, fishing in prohibited areas, and other activities that are closely related to the core business of fishing.”

This research contributes to greater transparency for the fisheries supply chain.

It builds on CSIRO’s extensive research to help tackle illegal, unreported and unregulated fishing activities through low cost and effective tools utilising artificial intelligence and new technologies to assist governments and industries across the world.

The literature review for the Asia-Pacific region included only one article pertaining to illegal fishing in Australian waters.