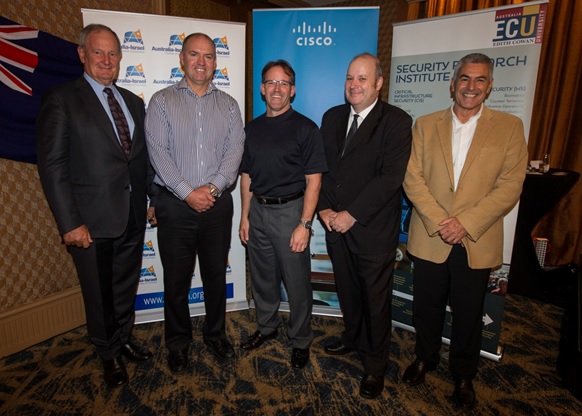 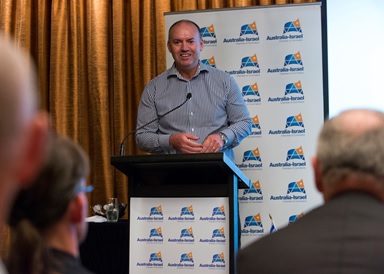 The ECU has maintained an association with the AICC(WA) for several years, during which time the ECU’s Security Research Institute has become recognised as a world leader in cybersecurity research. Both the AICC(WA) and ECU have also shared a corporate relationship with Cisco, whose investment into education and research has positioned Western Australia at the forefront of academic and industry development within the Australian Cybersecurity sector.

In welcoming Mr John N Stewart for his first visit to Western Australia, Mr John Cluer, AICC(WA) Chief Executive provided an insight into Israel’s Cybersecurity industry. Describing a market that in 2015 attracted 10% of all global investment within its field, he demonstrated how Israel was at the forefront of developing solutions for a vicarious worldwide pandemic. Many of Australia’s largest companies have travelled to Israel to source network security and protection of their critical data.

This overview was further supported by Mr Gary Hale, Director, Security & Speciality Projects at Cisco Systems who spoke of his first hand experience as a participant in an AICC(WA) delegation.  Describing Israel’s cyber ecosystem he noted the innovation culture that commences with national service and culminates in the technology transfer of the tertiary sector.  Mr Hale suggested that some supplementation is required in order to apply the Israel model to the Australian NISA (National Innovation and Science Agenda.  He also quoted research showing that already the Australian economy loses 1% of its annual GDP to cyber security breaches, with many heightened new risks emerging.  Only one in four companies globally have a cyber security strategy.  Cisco has funded and invested into cyber security research, supporting new innovation for business.  In introducing his “boss and mentor”, Mr Hale noted the thought leadership of John N Stewart, and how the impact of his involvement has influenced one of the world’s most important emergent industries from inception.

Mr John N Stewart is Senior Vice President of Cisco and a founding leader of Cisco’s Security and Trust Organisation. Amongst other global roles he is also an Advisory Member to the Australian Prime Minister’s Cyber Security Review. 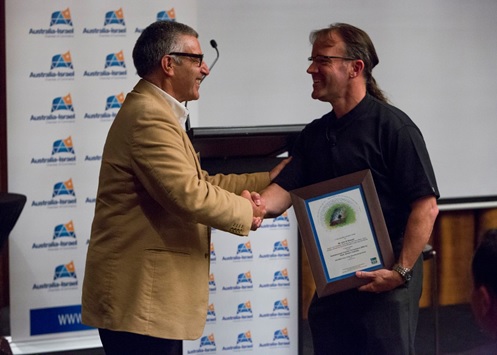 It is evident that Mr Stewart is passionate about his career, which he described as his life’s work. He commenced his address by noting that all responsible people need to be aware of the power of interconnection, and the positive potential to grow and develop global knowledge. At the same time, disruptive influences, system controls, crime and power shifts are risks moving at a rate far greater than policy can contend with. That is why, he noted, Cybersecurity is an individual responsibility.

Mr Stewart proceeded to describe various forms of espionage.  Firstly at the individual level, the revenue and wealth associated with cyber security crime is in dollar terms larger than the Australian economy.  Secondly, at the national level, the ability to undertake spy and surveillance activity is now enabled without the need for physical presence.  Thirdly, within the corporate sector the proprietary rights associated with data and knowledge are subject to compromise.  “No material success is needed in the field of electronic science.  How do we protect our innovation?”

Some real examples of corporations whose entire data systems were erased within 24 hours, and hypothetical examples such as internet systems which can be brought down during remotely performed surgical procedures highlighted the extent to which cybersecurity risks can be catastrophic. 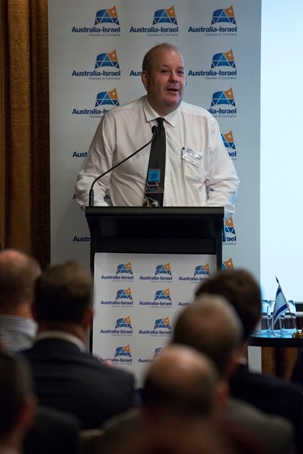 Cisco undertakes analysis of 2.5 Tb of data, more than 1.2 billion new pieces of information each day. It updates more than 170,000 networks every six minutes and has real-time impact on an ever increasing volume of internet security breaches.

Mr Stewart also addressed some of the ethical issues associated with product design, including transparency and disclosure. Taking a utilitarian stance on developing solutions for the broadest benefit, he noted no room for compromise on product integrity. He also noted that future innovation for Cisco sits within the capability by which systems perform better, become more cost effective, and are faster in terms of deployment. Speed is a critical area of focus.

Commenting on his first impressions of Perth, Mr Stewart spoke of the lifestyle and amenity that he had immediately observed. He noted industry engagement with students and the academic sector, extending an accolade to ECU and Curtin University for their focus on cybersecurity research. He also commented that there were many examples of business innovation undertaken by WA business that he had not seen elsewhere, citing big data and analysis and technology development for the resources sector as a prime example. There was also a challenge that he left for his audience, suggesting that Western Australia can become the innovation centre of Australia with the right model and focus.

“Maximise the best. This is what we have been using the internet to achieve. Also minimise the worst. Nobody should leave this room thinking that CyberSecurity is someone else’s problem. This is your issue”.