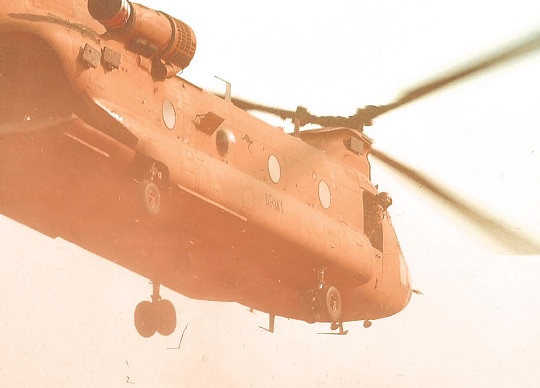 The Australian government has been “missing in action” on the growing national security risks posed by climate change. This is according to a non-partisan network of former defence and security leaders. And that includes some of Australia’s most senior former military personnel.

Missing in Action: Responding to Australia’s Climate & Security Failure, the new report released by the Australian Security Leaders Climate Group, calls on the Australian government to “prevent devastating climate impacts by mobilising all resources necessary to reach zero emissions as fast as possible”. It adds, this starts with a comprehensive Whole-of-Nation Climate and Security Risk Assessment and the establishment of an Office of Climate Threat Intelligence as the foundation for a Climate-Security Risk Action Plan for Australia.

The report describes global examples of climate security impacts. This includes how climate-fuelled water and food insecurity contributed to armed conflicts in Syria. As well as the Maghreb and the Sahel and the Arab Spring rebellion in the Middle East. The report says this occurred after the spot price for wheat tripled due to reduced wheat supply in Russia and China following extreme climate events. Recent commentary has also highlighted climate related food and water issues in Afghanistan that are contributing to insecurity in the region.

“Australia has been “missing in action” on climate security risks. We are falling well behind our allies and failing in our responsibility to protect our own people,” Former Australian Defence Force Chief, Admiral Chris Barrie AC (Retd), said.

“The dangers that climate change impacts pose to international peace and security are real and present. In vulnerable countries, climate-fuelled water and food insecurity have mixed with instability, leading to the collapse of governments and civil wars, as we’ve seen in the Middle East and sub-Saharan Africa.

“The failure of leadership and inaction by Australian governments have left our nation ill-prepared for the security implications of devastating climate impacts at home and in the Asia Pacific, the highest-risk region in the world.

“We must stop pretending to act by diverting attention to the symptoms of climate change, and start addressing the fundamental causes, primarily by rapidly decarbonising the economy.

“Yet, as the latest IPCC report demonstrates, we are likely to underestimate the scale and scope of the security risks posed by climate change because they have not been fully assessed by our governments. Climate-security risks will blow up in the future, and we must be better informed and prepared by urgently undertaking a comprehensive Whole-of-Nation Climate and Security Risk Assessment.”

The report highlights how water inflows into Australia’s food bowl of the Murray-Darling Basin have reduced by 40 per cent since 2000. It also warns of greater domestic water insecurity in future. And it highlights the threats posed by climate change to Australia’s supply chains.

“Australia’s supply chains are precarious, being a distant island in a hyper-connected global economy. In a global emergency where supply chains are disrupted, domestic oil supplies would last only weeks. If that coincided with extreme climatic impacts, as may well occur, civilian and military capacity to provide disaster relief would be severely compromised.”

In addition, the report details how Australia’s military resources are already being used and stretched in climate-related disasters. Such as during the Black Summer fires in 2019-20, which were worse than projections of fire severity for the year 2100.

“Climate change is already placing great pressure on the ADF to pick up the pieces in the face of accelerating climate impacts. Higher levels of warming will stretch them beyond their capacity to respond,” Admiral Barrie (Retd) said. “Australia must start to contribute fairly to the global effort to limit these impacts.”

Writing in the foreword, Rear Admiral Neil Morisetti CB RN (Retd), Professor of Climate, Resource Security at University College London, says the responsibility for emissions reduction “sits squarely on the shoulders of all governments but perhaps more so on those of Australia, for not only is the Australian continent particularly vulnerable to climate change, but the country is one of the world’s largest exporters of fossil fuels.”

The report lays out a Climate-Security Risk Action Plan for Australia based on four themes. They include, demonstrating leadership, assessing climate risks, coordination, and cooperation across government, and acting and investing with urgency. It calls on the Australian government to undertake the following actions to make it fit-for-purpose on climate-security risks: