“A 3D model of one of the Armoured Fighting Vehicle Facilities.”

Engineering, design and advisory companies Aurecon and AECOM, together in a joint venture, are bringing to life innovative adaptable facilities for the Department of Defence’s next generation of Armoured Fighting Vehicle fleet across Victoria, Queensland and South Australia.

Now commencing the construction phase for Stage 1, the new facilities will support the maintenance and training requirements of the most advanced and capable fleet vehicles the Australian Army has ever acquired.

“Our combined national team’s thinking has provided the Australian Defence Force with truly fit-for-purpose facilities that will support the mission readiness of the Army for many years to come,” David said.

“For example, we used 3D models to determine which existing buildings and engineering services had a relationship with each other, so that we can adapt and incorporate them into the new design. 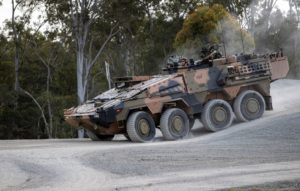 “Given the dispersed nature of the project, the scale of the designs required, the tight timeframe, and the fact that we are dealing with Defence bases that have facilities of various ages – these capabilities were invaluable,” David concluded.

AECOM Defence Industry Director, Andrew McDougall, said that the facilities have been designed flexibly to cater to the ambiguity of future vehicle requirements.

“The flexibility of our design means that Defence can upgrade its facilities in stages, and adapt them accordingly,” Andrew said. “The phased acquisition of the fleet over the coming years means that we don’t know exactly how many vehicles the facilities may need to support, or what capacity of engineering services are required.

“Therefore, we’ve designed the facilities’ vehicle bays to be modular so that Defence can add or subtract what it needs.

“We also designed the electrical facilities and other engineering services so that they can be increased in size or adapted for future changes in vehicle numbers,” Andrew concluded.