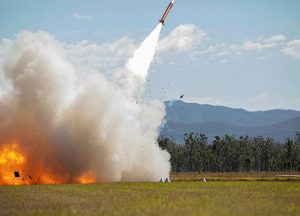 Live fire strikes were conducted from sea, land and air onto Townsend Island and Pyri Pyri within the Central Queensland military range complex.

“On Friday we saw the first ever Australian firing of a Patriot air defence missile system, which was just tremendous and a real privilege to see in action,” Major General Ellwood said.

“And today, we stepped up the complexity of training with combined strikes involving several of our participating nations.”

“In the coming days our forces will shift gears again and advance up the Queensland coast to conduct amphibious landings, maritime and air warfare training, and much more.”

Exercise Talisman Sabre is the largest bilateral training activity between Australia and the United States, involving around 17,000 personnel.

The live-fire exercise at Shoalwater Bay involved the following platforms: